What should have been an ordinary day at the Charlotte Douglas International Airport became something of an event. One passenger, who it turns out has no business interacting with anyone, let alone sitting in an enclosed tube with many people, decided to cause trouble. American Airlines employees had him removed from the plane, and that's when the worst airline customer ever went ballistic.

Kelly Smekens recorded the North Carolina Passenger's initial attempts to, well- we're not really sure what he was trying to do here. Intimidate his way back on the plane?

After phase one of his plan fell flat, the removed plane rider started actually swinging at folks who were just trying to do their jobs. Chaos en-fucking-sued.

Just a typically day in Charlotte Douglas Airport on American Airlines @AmericanAir, where’s United when you need them? @united Do you think we should ban all traffic batons, @realDonaldTrump? @TODAYshow pic.twitter.com/pMsmn5kR1l 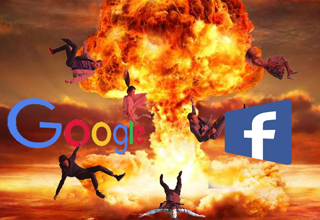 NEXT ARTICLE 5 Warnings about the Future by Those Responsible