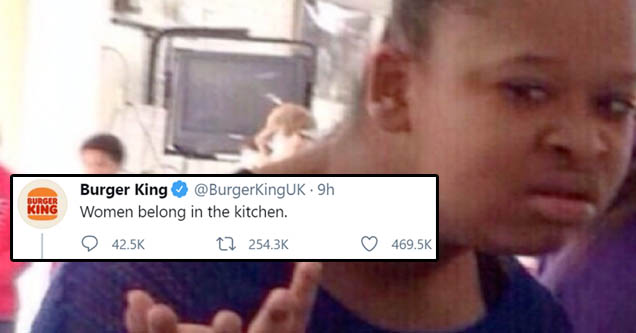 March 8 marks International Women's Day, a day to bring focal attention to the many political, economic, and cultural contributions women have made throughout history, while also shining a light on the many issues women still face today in areas like access to education, reproductive rights, and of course, equality in the workplace.

It's no surprise by this point that, as with any major event, holiday, or movement, many a brand has latched onto the day with their own 'woke' tweets. The folks at Burger King UK decided to tackle the issue of gender disparity in the foodservice industry with a tweet that truly takes the cake for awful brand tweets:

Now, in all fairness they did follow up shortly thereafter with a longer explanation of the intent behind the original message:

That's all well and good I suppose, but it wasn't enough to stop them from getting roasted online.

burger king: —we have the PERFECT joke pic.twitter.com/ohqN7wqWDa

just showed up for my first day at Burger King and they told me this was the uniform ? pic.twitter.com/Il1Xi7Jdf4

Burger King had the perfect setup to go with Burger Queen for the day but chose to publicly execute their social media people instead.

KFC Actually tried to playfully call them out on it but - in a move that seems ironically inspired by a sandwich KFC serves - BK decided to double down:

Why would we delete a tweet that’s drawing attention to a huge lack of female representation in our industry, we thought you’d be on board with this as well? We've launched a scholarship to help give more of our female employees the chance to pursue a culinary career.

Some users even pointed out that there was DEFINITELY space for the entire thing to fit into a single tweet.

The decision to split it up the way they did seems even more tasteless because it's clearly a desperate attempt to gain virality for all the wrong reasons.

Burger King baiting people with a "women belong in the kitchen" tweet so they would angry-click through a thread - on International Women's Day - gets even nuttier when you realize a TEAM of people had to approve this pic.twitter.com/vVz0JZGsUi

It appears this entire message was a fully-realized campaign that ran internationally, and the print version of it that ran in the New York Times has already been distributed to the public.

The funniest thing about the Burger King "tweet" is that it clearly wasn't just a tweet. This was a whole international campaign that the UK timezone just got first. They can decide against tweeting it from the US account but they couldn't pull the New York Times ad fast enough‍?? pic.twitter.com/i4EvOCdFDF 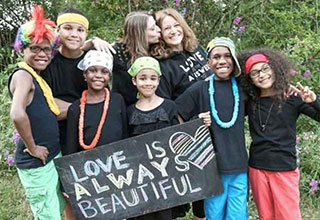 NEXT ARTICLE Twisted Parents Kill Themselves and Their 6 Adopted Kids