Have you ever wondered what it would be like to be a professional boxer or MMA fighter? Granted, most of us don't have the physical ability let alone sheer toughness required to step into one of those rings but it can be fun to think about. I've often said I would probably try it... until I actually got hit one good time time and I would be like "whelp, that's enough of that bullsh*t".

Recently a super lightweight Kaywann Sistrunk (0-0-1) had a similar experience in a match versus Sevelle Hasan. Halfway through the 3rd round Sistrunk gets absolutely ROCKED by a straight right that sent him to the mat. Sistrunk got up relatively quickly but pretty much decided he had enough at that point and waved off the referee and exited the ring.

Sistrunk was disqualified from the match (for leaving the ring / quitting the match) and is currently listed as suspended until October 23rd.  It is unclear whether Sistrunk plans to return to the ring or is weighing his alternative career options.  Check out the gnarly punch below.

You ever been hit so hard that you had to rethink your life plans? pic.twitter.com/tnacMCPTYZ

Here is an alternate angle of the incident:

While perhaps it wasn't the most graceful of exits (or perhaps retirements) it takes some balls to agree to let someone punch you in the face for 12 minutes so there's that I guess. 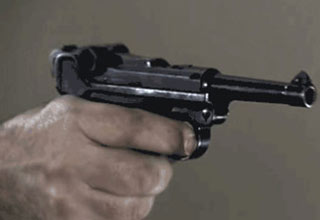 NEXT ARTICLE 24 Slow Motion Gifs That Are Fun To Watch