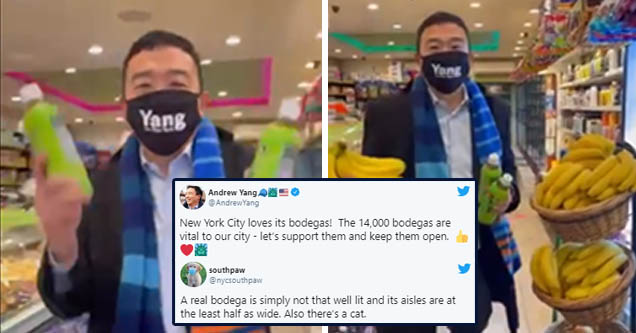 In case you missed it amongst all the craziness that the last few months have flung at us like so much s**t in a fan, former Democratic Presidential candidate Andrew Yang has launched a campaign to become Mayor of New York.

Yang's campaign has already come under fire for fleeing NYC along with his family during the pandemic. When asked about it, Yang's response only served to underscore just how out of touch he is with the average New Yorker whom he hopes to represent one day:

Yikes! It's not like hundreds of thousands of NY residents had to put up with EXACTLY that situation, likely in apartments far smaller than Yang's.

Today, in an effort to redeem his image as a man of the people, Yang decided to pay a visit to one of NYC's 14,000 bodegas.

New York City loves its bodegas! The 14,000 bodegas are vital to our city - let’s support them and keep them open. ❤️ pic.twitter.com/pGb24IerGz

Unfortunately for Yang, his choice of bodega is definitely more of a nice deli than the relatively gritty, no-frills neighborhood bodegas that most New Yorkers frequent.

Yang: I love bodegas!
Queens: Is... that a Food Bazaar?
Manhattan: I think that's an Essen, the bananas are a give away.
Suburbanites: NOT ALL BODEGAS ARE CRAPPY.
Manhattan: IT'S NOT A BODEGA
Queens: There ain't even a cat. Get his bum outta here. https://t.co/X2gkEFtvvg

If you don't hear the sound & smell of Chopped Cheese being made in the grill OR see that random cat lurking around staring at you OR see a Broken ATM, it's not a real Bodega https://t.co/jyVicvMrtS

Sir, bodega where? This is a midtown deli https://t.co/TjhD77eFsK

Andrew Yang pulling up for his favorite cup of coffee. pic.twitter.com/67GXBfJAax

A real bodega is simply not that well lit and its aisles are at the least half as wide. Also there’s a cat. https://t.co/nmKWPYqXyj

Plenty of people pointed out the conspicuous lack of a 'bodega cat.' For the uninitiated, one or more cats wandering the store or sleeping on the counter are a relatively ubiquitous feature of most NYC bodegas.

Meanwhile, in a real bodega: pic.twitter.com/bArBxEmjMN

The thing that I found most hilarious was the way he handled the bananas. It's so clear that he realized he was taking too long to pry off the single banana he actually wanted, so he just awkwardly grabs the whole thing.

Andrew Yang trying to buy ONE banana at the bodega pic.twitter.com/bbW9NDQH9h

One Twitter user also posted this photo, which isn't the ACTUAL 'bodega' he visited but is probably pretty damn close to what it looked like.

This is the “Bodega” he’s talking about pic.twitter.com/kIU7R2MTiE 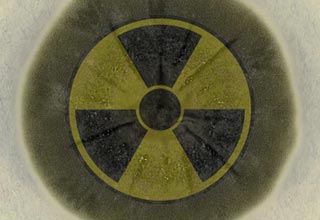